Vintage Tom mann - One Of A Kind In The History Of Bass Fishing .

The History of Fishing Reels 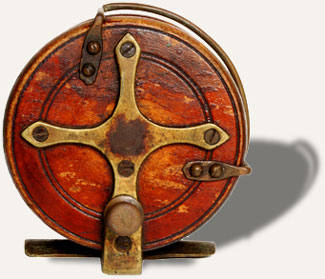 The earliest fishing reels were used primarily to store extra line. It wasn't until George Snyder of Kentucky developed his Kentucky Reels that fishing reels became a tool for casing and reeling in fish.

Today, there are perhaps few technologies in any walk of life that are as diversely produced and incredibly varied as fishing reels. Highly specified and carefully fine-tuned for various purposes and price ranges, fishing reels are part science and part art, and they are of course an integral part of fishing. But there was a time when fishing reels were not ubiquitous and in fact were not even used.

The first modern fishing reels are credited to George Snyder of Kentucky, dating to the early portion of the 19th century, around the 1820s. His early Kentucky Reels were certainly not the first known fishing reels, but they were perhaps the first known multiplying reels. Prior to this, reels were used more for simply storing excess line. Following, they became a tool for casting, and the innovations have been endless since then, creating a debt of gratitude for anglers of all kinds.

But don't be fooled by that relatively recent date; there were fishing reels in one form or another dating back significantly further back through history. A Chinese painter by the name of Ma Yuan depicted a fisherman using a rod with a reel in a painting he produced in 1195 entitled Angler on a Winter Lake. About another century later, another Chinese painter, Wu Zhen, also had a painting with a fishing reel being depicted.

Over the following centuries, various other documented references were made to fishing reels. An Armenian work from the 13th century depicts a fishing reel, a Chinese encyclopedia in 1609 has a detailed illustration of a fishing reel and all of this before there was finally an English illustration produced in 1651. Talk about being late to the game, there is actually literary evidence of a fishing reel being used perhaps as far back as the fourth century AD!

With the Industrial Revolution, the end of the 19th century was a period when fishing reels could be mass produced, making them more affordable and accessible to the public, in part creating and in part feeding the growing demand. Their popularity and usage spread, and many companies began modifying designs and concepts to get their own reels to the market.

Some of those companies, such as Pflueger and South Bend, have survived all the way to the current day and age. Due in part to the proliferation of fishing reels during this time, collecting fishing reels offers a huge opportunity for exploration and the discovery of hidden gems.

The history of fishing reels is no short story, and their evolution over the past 100 to 150 years has been fantastic. After the first introduction and popularization of the multiplying reels made by George Snyder of Kentucky, it was not long before there were different kinds of reels for different fish and different fishing techniques. Today, these early designs and innovations, some of which were produced by the prominent companies of modern times, are highly sought after and make for the abundant and rewarding hobby of collecting vintage fishing reels.