Vintage Tom mann - One Of A Kind In The History Of Bass Fishing .

The History of Fly Fishing 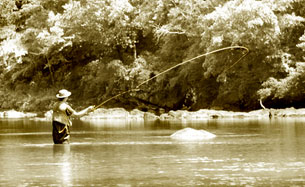 Although the tackle and techniques have evolved greatly over the years, fly fishing had its beginnings as far back as 200 A.D., when some enterprising Macedonians tied a piece of wool and two feathers to a hook.

As you reach back and over your head, preparing to flick your wrists and hopefully send out a perfectly placed cast, did you ever think that 1,800 years ago people were doing the exact same thing? Well, certainly not the exact same thing, as today's fly fishing equipment and techniques are vastly evolved and improved since those early days, but the basic principles remain the same.

The history of fly fishing extends back at least as far as 200 A.D. in Macedonia, when it was documented that the Macedonians fastened a red piece of wool around a hook with two feathers attached, tied it to a six-foot wooden rod, and caught fish with it. Actual flies were not used, since once touched and handled they lost their original color, appearance and allure.

Sport fishing started to become popularized in various areas throughout the Medieval period, and the roots of the hobby were firmly planted in areas such as Scotland, northern England and other lush, hilly and river filled areas in Great Britain.

The first major written documentation of fly fishing in English was published in 1496, called the Treatyse on Fysshynge with an Angle, as a part of the second edition of the Boke of St. Albans. There are instructions on how to make various rods, hooks and lines, and there are even 12 separate fly patterns and designs discussed. There were also tips for various different species of fish found in the nearby waters. This published work was a major boon for fly fishing, establishing its presence and boosting its popularity.

By the end of the 18th century, there was finally some growing differentiation between styles of rods and other materials, and there was improvement in the construction of these rods as well. Bamboo cane was starting to be dabbled with, joints were introduced and improved upon, reels became widespread and more.

It was all the launching pad for the vast explosion of fly fishing to come throughout the 1800s and into the early 1900s. Rods were shortened and made more reliable, clear styles were developed for trout fishing, salmon fishing and much more. Finally some modern techniques such as nymph fishing and false casting were developed. It was not until the middle of the 20th century when the rods you are more familiar with were produced, taking advantage of new materials such as fiberglass and then carbon fiber and other composites.

The next time you head off for a weekend excursion with your son, your father, your buddies or anybody else to enjoy the serene relaxation and great fun of fly fishing, take a moment to recall the many centuries that have passed since fly fishing was first attempted. When you struggle to net your catch of the day, reflect on what it might have been like doing the same without all of modern tools you're working with.

Sure, catching that fish and winning the day was surely more difficult in years past, but it was perhaps even more satisfactory. The bottom line is that today you get to enjoy the many conveniences that have been tested and developed for hundreds of years, and appreciating the history of fly fishing should provide some great perspective on that.