The History of Fly Rods 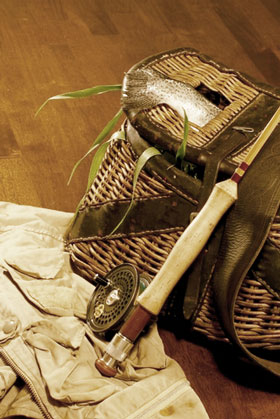 What we might call modern fly fishing dates back several hundred years, but the history of fly fishing in and of itself may extend back nearly two millennia, back to about 200 A.D., when the Macedonians attached brightly colored pieces of wool and cloth to hooks and cast them out attached to wooden poles.

While the ancients must have had success with these and other early techniques, innovation, development and quality by our standards was slow to turn up. By the Middle Ages, knowledge of fly fishing techniques had advanced to a high enough degree where different varieties of lines, hooks, weights and so forth were used for various different species of fish and even seasons of the year. Of course, all of your own gear had to be painstakingly produced with your own hands and techniques.

By the late 18th and early 19th century, more innovations were finally starting to emerge. Newer techniques, materials and designs were being tried, and of course the Industrial Revolution made it easy to pick up mass produced rods and lines as opposed to crafting your own from raw materials. Reels were being produced and were commonly used, silk lines were being deployed, the length of rods was decreasing to a manageable 10 or 12 feet, from the 16 foot varieties previously developed.

There were several go-to woods for construction, with Calcutta or split bamboo being a preference when available. Ash, lancewood and hickory were the most commonplace, as they had been for centuries prior as well, although quality started to improve with new joint designs that reduced snapping, breaking and other misadventures.

By the late 19th to early 20th century things had progressed a great deal. A far greater variety of flies were available, new casting techniques such as the false cast and nymph fishing had been developed, and more people were fishing for leisure and sport. Many people were even traveling to well-known hotspots for prime fishing opportunities as opposed to simply sticking with their local land and backwaters.

As the 20th century progressed, inventors and tinkerers began developing the earliest versions of the fly rods we know today. Fiberglass rods were produced, and in following decades carbon fiber and other composite materials were used, reducing weight and adding even more strength. It's a far way from some colored wool on a stiff wooden pole.

All of these many changes and innovations to the fly rod have created the opportunity to collect and explore many of these vintage designs. Various individuals may be fascinated by particular companies, models, time periods or materials.

Generally, many collectors recognize the split bamboo fly rods or Tonkin cane rods as being beautiful, classic additions to any collection. Considering their general fragility compared to today's technologically advanced fly rods, finding a beautiful split bamboo fly rod in pristine condition is a real treat and an opportunity not to be missed.

So, while you enjoy the conveniences of your ultra-strong, ultra-flexible and ultra-light fly rods today, it's always fascinating to take a look back through history to see how these developed over the centuries.